This is a revision of an entry that first appeared on this blog on – appropriately – May 1st, 2014.  Be warned that it’s packed with spoilers about The Wicker Man (1973).

The Scottish-American singer and actress Annie Ross died last month at the age of 89.  Even if she hadn’t been a celebrated jazz chanteuse, she could boast of leading a varied life.  She worked as a child actress in the USA, became a jazz artist in Europe as an adult, became a familiar face on British TV in the late 1970s, and finally re-established herself in the USA and got citizenship there in 2001.  She was both the sister of the well-known Scottish comedian and actor Jimmy Logan (whose performance as Archie Rice in John Osborne’s The Entertainer I was lucky enough to see at Aberdeen’s His Majesty’s Theatre in the mid-1980s) and the one-time lover of a rather different type of comedian, Lenny Bruce.  And she acted in films as wildly assorted as Peter Collinson’s Straight On Till Morning (1972), Richard Lester’s Superman III (1983), Danny DeVito’s Throw Momma from the Train (1987), Robert Altman’s The Player (1992) and Short Cuts (1993) and, yes, Frank Henenlotter’s Basket Case 2 (1990) and Basket Case 3: The Progeny (1991).

She was also tasked with the unusual job of making Britt Ekland sound Scottish in my all-time favourite horror movie, 1973’s The Wicker Man.  Yes, whenever Ekland opens her mouth in the role of Willow Macgregor, the landlord’s daughter at the portentously titled Green Man Hotel on the remote Scottish island of Summer Isle, it’s not actually her Swedish-inflected tones you hear but those of Annie Ross instead.

Curiously, despite Ross’s famous singing talent, she didn’t get to voice Ekland during the scene that required her character to break into song.  At that point, supposedly, Ekland was dubbed by another singer, Rachel Verney.  (I’ve heard claims that Annie Ross did perform the song as well, but the weight of evidence seems to be against that.)

Anyway, this gives me a chance to talk about the song sung in that scene, Willow’s Song, sometimes known too as How Do.  The luscious Willow Macgregor sings it one night when she’s trying to lure the Green Man’s current guest, Sergeant Howie (Edward Woodward) into her room for some hanky-panky.  Howie, a policeman sent to Summer Isle to investigate the disappearance of a local schoolgirl, is a devout Free Presbyterian and is already unimpressed at finding that everyone on the island is a practising pagan.  His strict Christian principles prevent him from answering Willow’s call.  Just about.

14 years ago, I was working in the North Korean capital of Pyongyang, whose small enclave of expatriates, mostly diplomats and aid workers, held a weekly cinema evening.  Noticing that the next such evening fell on October 31st, i.e. Halloween, I dusted down my DVD of The Wicker Man and persuaded Pyongyang’s little cinema society that this would be a good time to watch a classic horror movie.  For most of its running time, the audience seemed pleasantly bemused by the film.  They enjoyed a good chuckle at how the pagan islanders led the stick-up-his-arse Howie on a merry dance around Summer Isle, taunting him with their innuendo-laden folk songs and their unconventional sense of public decency (e.g. organising mass couplings in the local graveyard, dancing naked through flames in the centre of stone circles).  But the people sitting closest to me kept leaning over and whispering, “Isn’t this supposed to be a horror film?”

Then the film’s final ten minutes arrived.  Howie discovers what the islanders have planned for him at the climax of their May Day celebrations – it involves ‘an appointment with the wicker man’ – and the room fell silent.  The silence continued for several minutes after the film ended, broken only by the voice of a Scotswoman who worked at the British Embassy.  She kept wailing to everyone around her, “Scotland isn’t really like that!  Scotland isn’t really like that!”

Later, a Dutch lady whose husband headed the Red Cross and Crescent’s operations in Pyongyang came over to me with big smile on her face.  “I really liked that,” she said.  “But you know, most of the film felt like a musical to me.”

And indeed, one reason why The Wicker Man is so special to me is its music.  Willow’s Song is the centrepiece of its soundtrack but the film is choc-a-bloc with gorgeous and haunting folk tunes.  Meanwhile, the lack of music is a reason why the 2006 American remake directed by Neil Labute and starring Nicholas Cage sucks, although, to be honest, there are many reasons why it sucks.

The man responsible for the original Wicker Man’s music was New Yorker Paul Giovanni, who assembled a number of songs, some self-composed, some traditional folk songs, and performed them with the folk-rock band Magnet.  Clearly a renaissance man, Giovanni was also a playwright and actor during his career.  Tragically, in 1990, he died from pneumonia, a complication caused by an HIV/AIDS infection.

As well as showcasing the film’s most famous song, the sequence in which Willow Macgregor sings has some notoriety because it shows her performing a nude dance as well.  (Having withstood Willow’s saucy enticements, Howie discovers later that the episode was arranged by the crafty pagan islanders to determine whether or not he’s a virgin and hence suitable sacrificial material.)  This is probably Britt Ekland’s greatest cinematic moment.  Mind you, her only other well-known major role is in The Man with the Golden Gun (1974), so there isn’t much competition.

Come to think of it, though, Ekland was pregnant during the shooting of The Wicker Man, so it isn’t her naked body that we see cavorting during the scene.  The filmmakers hired a stripper to act as her ‘body double’ and, in at least one interview with her I’ve read, Ekland has remarked cattily about the size of the double’s bum.  So with Rachel Verney (or possibly Annie Ross) doing her singing, and a stripper doing her dancing, Britt’s greatest cinematic moment doesn’t actually have much Britt in it.

It was ignored at the time of its release but, over the years, the prestige of The Wicker Man has grown.  And as I’ve said, much of its mystique is due to its music.  Willow’s Song in particular has received much attention and a number of artists have had a go at covering it.  The most famous version is probably that by cinematically inspired electronica band the Sneaker Pimps.  It appears on their acclaimed 1996 album Becoming X, for which they recruited female singer Kelli Dayton (now Kelli Ali) to do vocals.  Afterwards, the band ungentlemanly gave Dayton the shove, claiming ‘her voice was no longer considered suitable for their new music’.  And has anyone heard anything of the Sneaker Pimps since then?  No.  Thought not.  Incidentally, if you have the right edition of Becoming X you’ll find as a bonus track a version of Gently Johnny, the second-best song that Paul Giovanni / Magnet recorded for The Wicker Man.  The scenes with Gently Johnny were chopped out of the film’s original print but years later were restored to the Director’s Cut of it.

The Sneaker Pimps’ version is still recognisably the movie’s Willow’s Song, although it has a lush, synthesised sheen.  Filmmaker Eli Roth liked their take on it so much that he incorporated it into the soundtrack of his notorious 2006 ‘torture porn’ epic Hostel – the Wicker Man reference signifying that Something Bad is going to happen to Roth’s own hapless protagonists.  I don’t find Hostel as objectionable as other people do, but nonetheless I feel that the delicate, pleading tone of Willow’s Song is incongruous in a movie that’s basically about dumb American backpackers getting tortured to death.  Interestingly, both The Wicker Man and Hostel go against the philosophy of conventional, conservative horror movies, like John Carpenter’s Halloween (1980), which holds that only characters who hang onto their virginity escape being victims, while promiscuous characters die horribly.  In The Wicker Man, it’s the only adult virgin on the island who goes up in smoke at the end, while in Hostel, it’s the randiest backpacker who survives the carnage.

Before the Sneaker Pimps’ version, in 1991, indie band the Mock Turtles did a take on Willow’s Song – I haven’t been able to find an online recording of it to link to – while a dozen years later soulful British rock band the Doves attempted it too.  Both versions are distinctive thanks to the fact that a man, not a woman, does the singing.  The song was also covered in 2006 by Scottish folk singer Isobel Campbell (best known for her collaborations with Mark Lanegan), who unsurprisingly took a more traditional, folky approach to it, and in 2007 by indie-dance-hip-hop group the Go! Team.

Definitely worth mentioning is a version of Willow’s Song by the eerie, theremin-loving combo Spacedog, who decided to go for it and deconstructed  it.  They mixed in a sample from another classic British horror film, the ‘power of the will’ monologue delivered by actor Charles Gray while he played the villain in 1968’s The Devil Rides Out, and the results are impressively phantasmagorical.

Willow’s Song has a Wikipedia entry that lists a dozen other versions, which isn’t bad for a song that accompanies a scene in which a woman tries to seduce an older, unprepossessing man but is rebuffed, and in a film that baffled its studio, got chopped to pieces before its release and was, initially, financially unsuccessful and critically shunned.  Perhaps it’s the strange juxtaposition of elements that makes the song memorable.  Its sound is gorgeously ethereal and delicate but, when you listen to the lyrics, you realise it’s pretty bawdy too.  Willow promises Howie “a stroke as gentle as a feather,” and later boasts, “How a maid can milk a bull!  And every stroke a bucketful.”

Come to think of it, the contrasts in the song are similar to the contrasts in The Wicker Man itself, a film packed with humour, music and cheerful lewdness but ending with a horrific act of cruelty – contrasts that have ensured the movie lives on in Britain’s cinematic consciousness. 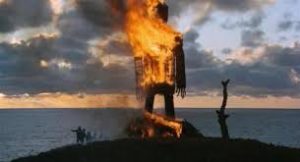