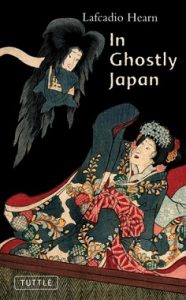 As we approach Halloween, I thought I would re-post some blog entries about my favourite ghost and horror-story writers.  Here’s what I wrote about Lafcadio Hearn in 2014.

19th-century writer Lafcadio Hearn surely had a confused sense of identity.  Perhaps it’s unsurprising that he had to travel to Japan, considered by westerners at the time to be the ends of the earth, before he found some cultural peace.

He was born in 1850 to a Greek mother and an Irish Protestant father, but was reared in Dublin by a great-aunt who fervently embraced Catholicism.  Later, he was later dumped in an austere boarding school in Durham in northern England.  It was during the unwelcome rough-and-tumble of boarding school that a playground accident cost him the sight of his left eye.  At the age of 19 he arrived in the USA, where he found employment as a journalist.  First he worked in Ohio, where he lost his job with a Cincinnati newspaper for committing the crime of marrying, briefly, a black woman, and then in New Orleans.

In 1890, he found his way to Meiji-era Japan where he worked as a school-teacher and university-lecturer whilst doing his best to chronicle the minutiae of life in a traditional and, to him, exotic Japanese culture that was fast vanishing under the wheels of Western-inspired industrialisation and ‘modernisation’.  Nowadays, to the Japanese at least, he is the most accomplished foreign scribe who ever attempted to describe their country in writing.

Since Hearn’s death in 1904, the Irish – who are good at doing this – have claimed him as one of their own.  So to me Hearn will always be the oddball wandering Irishman who got, and seized, the opportunity to record for posterity the details of life in old Japan just before it changed forever.  But in fact Hearn finished his life as a Japanese citizen.  He’d married a Japanese woman called Koizumi Setsu, fathered four children and taken on the Japanese name of Koizumi Yakumo.  He strikes a solemnly Japanese-looking pose with his wife in the monochrome family photographs of the time.  His head is always in profile with the right side of his face towards the camera, so that his disfigured left eye is out of view.

Nowadays, some historians and cultural commentators chuckle at Hearn and at how he hankered after a disappearing Japan that, as an outsider, had never belonged to him anyway.  Indeed, one wonders how much the old Japan described in his writings was embroidered by his own fanciful yearnings.  There’s also an irony in how the Japanese were happy to adopt Hearn as their foreign champion after they’d modernised themselves and dumped the very culture that Hearn was so preoccupied with.  In a way, Hearn’s writings have become the literary equivalent of a holiday brochure, advertising an ethereal version of Japan that now exists only in the imaginations of tourists.

But nonetheless, I admire Hearn’s writings greatly.  The descriptions of late-19th century Japan in his journalism, with their gaudy colour and intricate attention to detail, are startlingly evocative.  In our modern digital world, where you can point your phone at just about anything and instantly preserve its image in pixels, the business of writing detailed descriptive prose no longer seems necessary.  It’s probably become a lost art.  But when it was necessary, Hearn was one of its greatest practitioners. 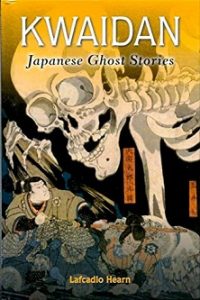 Hearn was instinctively drawn to stories about ghosts and the uncanny, perhaps because of his pedigree.  The supernatural is another thing that the Irish are good at.  Accordingly, his books In Ghostly Japan and Kwaidan: Stories and Studies of Strange Things, in which he recorded the weird and creepy folk tales circulating in his adopted country, are among the most famous works in his canon.   What I like about Hearn’s stories, or, more precisely, about Hearn’s retellings, are how commonplace the supernatural elements seem among the human tableau of medieval Japan.  The ghosts, spirits, goblins and demons don’t suddenly and unexpectedly intrude into the world of men and women.  They’re already there.  If they don’t quite exist alongside the Japanese people, they certainly inhabit the forests, mountain gorges, snowy plateaus and crumbling Buddhist cemeteries located at the edges of their existence.

Hearn’s tales also make a fascinating bestiary of the creatures of Japanese legends and folklore.  The story Mujina, for example, contains a being called a nopperabo.  In Japanese folklore this is almost perfectly human in its form and dress, apart from its face, which is as smooth and featureless as an egg.  Meanwhile, in the story Rokuro-Kubi, the title creature is a type of goblin with a detachable head.  Once detached, the head can flit about through the air, this way and that, like a giant bumblebee.  (Incidentally, in Japanese folklore, there’s another type of rokuro–kubi with an elastic neck that can stretch to grotesque and snake-like extremes.)

Perhaps the nastiest of Hearn’s supernatural beasties, though, appears in Jikininki, in which a travelling priest called Muso arrives in a village plagued by a hideous monster that materialises whenever there’s a death and a corpse becomes available for it to feed on: “…when the hush of the night was at its deepest, there noiselessly entered a Shape, vague and vast; and in the same moment Muso found himself without power to move or speak. He saw that Shape lift the corpse, as with hands, devour it, more quickly than a cat devours a rat – beginning at the head, and eating everything: the hair and the bones and even the shroud.”

I lived in Japan for much of the 1990s.  I encountered several foreign residents – gaijin as the Japanese referred to all us foreigners living in their country – who reminded me slightly of Lafcadio Hearn.  Seduced by Japan and its culture, they’d become ardent ‘Japanophiles’.  They’d ended up as a sub-species of gaijin that ordinary gaijin sniggeringly described as “being more Japanese than the Japanese.”  Such foreign types never seemed to me to be particularly happy.  Unfortunately, when you fall completely in love with a place, you become disillusioned when the place then spurns you by daring to change, losing what it had that attracted you first of all.  And at times there seemed no place in the world more capable of bewilderingly rapid and sudden change than Japan.

This certainly happened to Hearn.  Towards the end of his life, he wrote wearily that, “I felt as never before how utterly dead Old Japan is and how ugly New Japan is becoming.  I thought, how useless to write about things which have ceased to exist.”  Well, they may have ceased to exist by then, but I for one am glad that poor old Hearn bothered to write about them in the first place.

From the Asian Review of Books