I’m sure few people will be sad to see the back of 2020, although towards its end it did provide two glimmers of hope for the future.  These were the development of vaccines against Covid-19, the main reason for the year’s horribleness, and the defeat in the US presidential election of Donald Trump, the Clown-Master General who’s supervised a four-year circus of corruption, cronyism, disinformation, racism, culture wars, environmental destruction, denial of science and pandering to right-wing terrorism in the world’s most powerful nation.

On a personal note, 2020 wasn’t so bad for me in one way.  I did get a number of stories published.  These appeared under the pseudonyms Jim Mountfield (which I use for my horror fiction) and Rab Foster (for my fantasy fiction) and, a couple of times, under my real and boring name Ian Smith.  Here’s a round-up of those stories and details of where you can find them.

So 2020 has been a productive year for me in terms of my writing even if, in most other respects, it’s been as shit for me as it’s been for everybody else.  Let’s hope 2021 sees me retain that productivity, while generally offering a better experience for all of us.

Anyway, with fingers crossed, I bid you…  Happy new year! 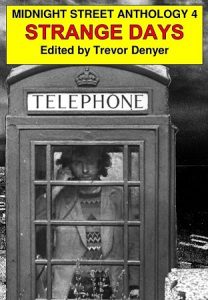